A few weeks of photos, in random order 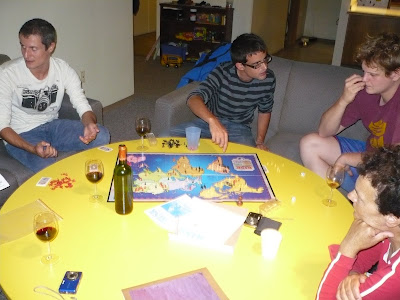 A game of RISK with a few Spanish Couchsurfers 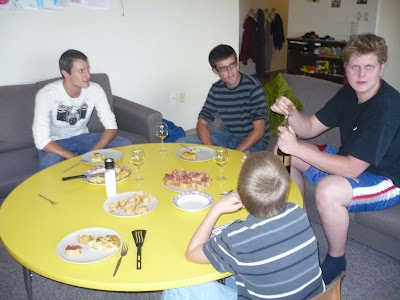 The dinner these nice boys cooked for us, it looked like potato and onion omelette's, but they called it tortilla. 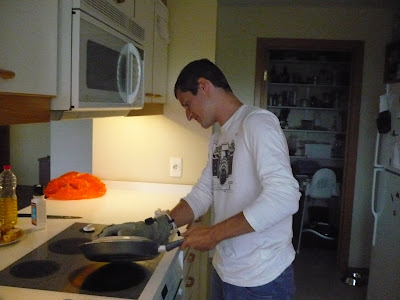 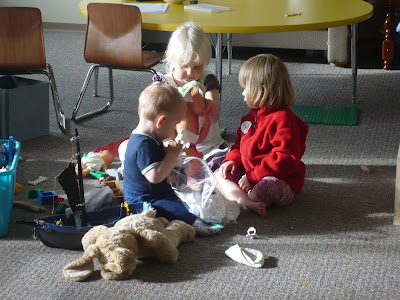 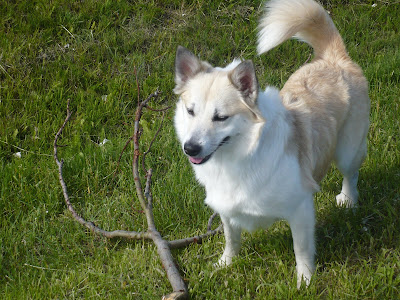 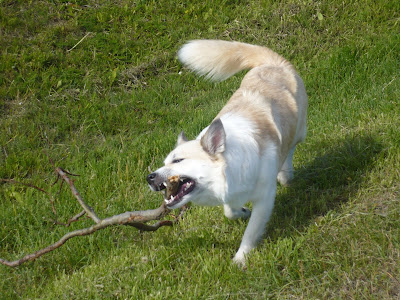 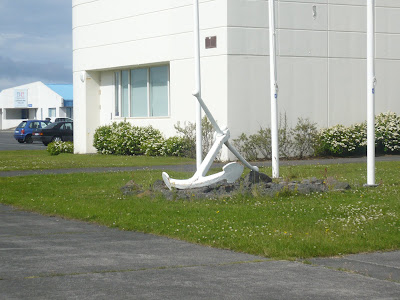 An anchor on rocks, the Icelandic art equivalent of kittens in America. 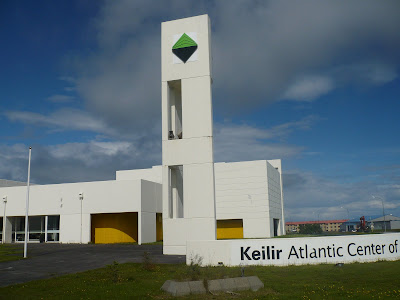 For the Americans it was a church, the Icelanders use it as a school. 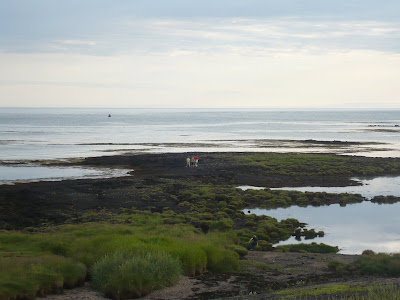 Kasper, Stefán and Jack in the distance. South coast of Iceland. 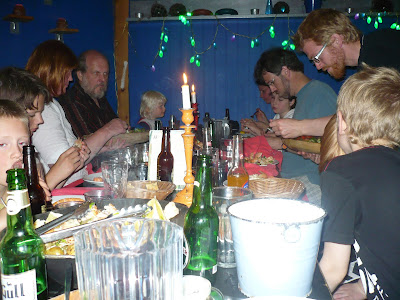 A large family, including many from Canada, get together for dinner. 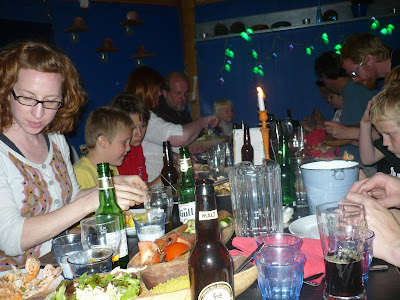 We all went out for a long drive (several hours) to get the best of the best lobster in Iceland. 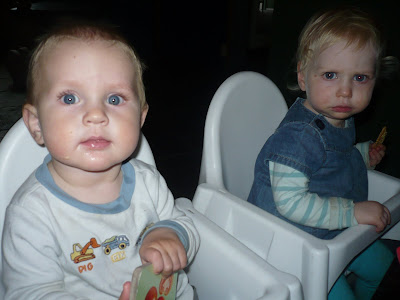 Leópold and his 2 year old second cousin Alice, side by side. 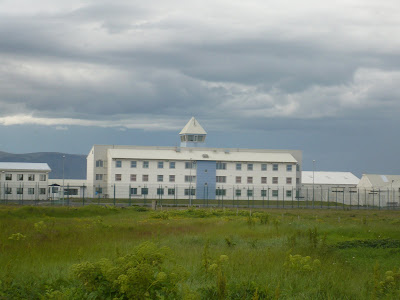 And last but not least, I finally saw Icelands largest prison in person. We were actually admiring the beautiful town beside it and realized that housing might be cheap here.
No comments:

I can not believe that I have not written anything in 10 days, and it is not from lack of things to say, I just can not seem to get near the keyboard, but we will get to that in another post.
First a story.

The bathtub drain has been blocked since I moved in and I have tried everything to fix it, aside from taking it apart.

Two bottles of Draino and one of 'Professional' Drain unclogging stuff, and it moves just as slow.

I am starting to think there is something very wrong going on down there.

When I told Davíð he laughed at me and pionted out that mixing a base and an acid was like putting water in the drain and he could not beleive that I didnt realize that.

Thinking back, I can not believe that I did not realize it either, and am actually feeling a little sheepish about the whole thing now.

Ill be having a talk with Cassie later.

But this all reminded me of another story:

Rewind 5 or 6 years to when we lived in Canada, in my in-laws house while they were in Iceland.

Now one day my sister was helping me get things ready because Inga and Rob were coming back for a visit.

The path leading up the the house was a skating rink of death, I needed to do something about the ice.

Under the steps I found a large pail full of a white powdery stuff, labeled Selt.

This made me think it was Salt and that selt meant Salt in Icelandic. I did not actually know any Icelandic at the time.

If I would have read further I would have seen that the instructions were in English, but anyways,
I spread this 'salt' all over the sidewalk and on the large chunks of ice in the yard.

After waiting a few minutes I noticed that it did not seem to be melting very well, so I added more.

Then while I was waiting for some melting action I started to read the label, and discovered this was not salt, it was cement mix.

This explained the clumping rather then melting.

When my in-laws arrived, my sister and I were outside, with children's shovels, trying to scrape up this wet concrete mix. It was impossible and it was a mess.

Lucky for me, I married into a family with a sense of humor, and that day will forever be remembered as the day I tried to add a concrete patio to the back yard.
1 comment:

Email ThisBlogThis!Share to TwitterShare to FacebookShare to Pinterest
Labels: stories

Everyone thought postsecrets was great, and it is not bad but this
well, I can not stop laughing.
Passive Aggressive Notes
love it
1 comment:

Remember when I talked about that couchsurfing family that did not surf my couch, but did meet us for dinner and a swim? (to lazy to look for the post)
Well, it turns out she has a blog - still not sure how I did not see this before - with pictures and her stories of her trip around our Island.
She shows how fun Iceland is while also showing how a family of four can travel and be exotic while being....a family of four. (a friend of mine ounce said that only single parents look there kids over seas on holidays, now I know she is wrong)
Well, I think you should look at the blog, and start planning your holiday in Iceland!
2 comments:

Email ThisBlogThis!Share to TwitterShare to FacebookShare to Pinterest
Labels: Couchsurfing, Stuff from online

You know there is a problem with the financial thinking of a country when the shops, including this advert for the GROCERY store, want to remind you that today is the start of a new credit card billing for the month.
That means its free right?

*This is from the Bonus weekly flyer that is emailed to me
No comments:

I ate the chocolate bars on the way to the bus stop, it had been 4 years since I had a Big Turk, and if you were wondering, it was as good as I remembered.

The shared the Willy Wonka Candy lick-a-sticks with friends, while being impressed that Willy Wonka was real.

I will not actually list everything, just saying how good it is to be thought of and know that even though I have been gone for so long, I am not forgotten yet :)
3 comments:

While having munching on a semi healthy snack today I noticed a sticker,
my baby carrots are offering farmcash on farmville.
How could life get any better then farmcash and carrots? 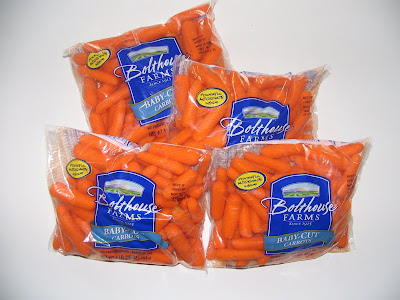 I know that for most things in life, Google has the answers. Scary I know, but usually true. Even the maps come in so handy except in Iceland!
I have had probably half a dozen lost couchsurfers, one even driving to the wrong town, thanks to Google Maps.
When I send someone a map to my house they often look it up on Google then tell me it doesnt match up.
And I thought it would be common sense to trust the Icelandic map over the Google one, but still we loose surfers.
And thats my small complaint for the night.
No comments: 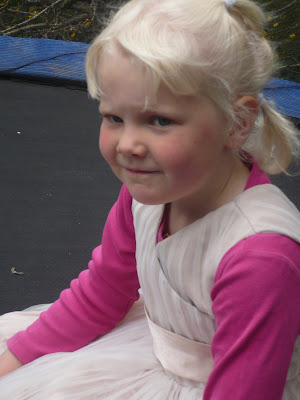 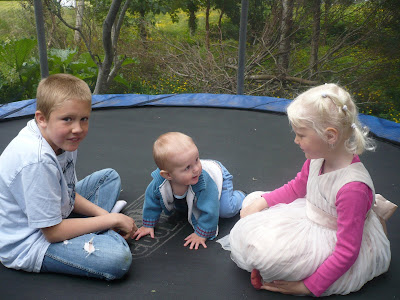 Here you can see Ulfrun (wolf rune or something like that), my niece.
In Iceland my kids names are so boring. But that is for another day.
No comments:

Email ThisBlogThis!Share to TwitterShare to FacebookShare to Pinterest
Labels: pictures

Its true, Leópold has learned to walk.
On Friday he took his first steps, almost by accident.
Yesterday he refused to even try, then today I saw him walking around holding on to the hose for the vacuum. He seemed to think it was holding him up.
Then after dinner he walked from the table to the couch.
My baby is growing up so fast, and this is a new record for my kids at 9 months and 3 days.
No comments:

Kasper goes to a day camp for three hours a day.

So when Kasper and his friend missed the bus home on Wednesday, rather then take the hour walk home, or wait 2 hours for the next bus, they hitchhiked.

I hope, that after our very serious talk, he stays away from the hitchhiking for a while now.

I admit I laughed to myself a little, but Davíð is having nightmares.

Sometimes I wonder if anyone else's kids are turning out so strange
4 comments:

Last week I received an amazing amount of gifts from North America.

First from Davíð's grandparents who were in the country, then from a fabulous family of American couchsurfers, and again from Davíð's uncles who are now visiting in Iceland.

Now in each of these circumstances I try to show how seriously grateful I am, because I am. Everyone has been so kind to me, but I am a little worried that I dont know how to act anymore. I am afraid I have melted into some half Canadian, half Icelandic attitude, that may come of as indifference - the last thing I want.

You see, usually when ever you give a gift in Iceland it is taken, often left wrapped, and whisked away, never be mentioned again.

In fact, when I worked at Toys R Us I often saw parents bring in bags of gifts there child had received, most not even opened, and return them all for a credit note in the store. We actually ended up unwrapping the gifts with the parents to scan them. Needless to say after that I stopped shopping for gifts and only give cash, save them the trouble and my own time.

Point is that when you give a gift it is taken, a little thanks is said and thats it. End of discussion, could never have happened.

Yet I seem to remember more of a ceremony to things in Canada, you would thank the person, maybe hug them and when ever you saw them after that, mention how useful the gift is or was.

When a child received a gift they were expected to thank the giver personally and the parent might even send a picture of the child and gift together to the giver.

It was just a big deal.

And Davíð says I am only 10% Icelandic!

Anyways,
Problem is when I receive gifts from North Americans who are waiting excitement, I forget what to do. I feel unsure, and a little insecure.

I think this is a feeling that may come up a lot when I do go home to visit because there are a many differences between Iceland and Canada, and I have now been here long enough that the Iceland way actually feels more natural now.
2 comments:

A super happy, only slightly be-lated Canada Day to everyone, but more importantly,
A super happy, only slightly be-lated Birthday wishes to my little sister, Shantell.
Well, she is only 13 months younger then me, but still,
I miss her terribly and worry that if I call, I will only start crying.
Next year, even if I have to hijack a fishing boat, I will be spending next July 1 in Canada, eating Dairy Queen ice cream cake and complaining about the heat while slapping mosquito's. Feeling itchy with anticipation.
1 comment: